A consortium of eight EU Member States and Associated Countries, including the UK, Denmark, Finland, Germany, Portugal, Spain, Sweden and Switzerland, is implementing an ERANET Plus activity entitled Bioenergy Sustaining the Future (BESTF). This activity provides funding to collaborative bioenergy projects that demonstrate at least one innovative step and will result in demonstration at a pre-commercial stage.

The Swedish/German BioProGReSs project is one of out three projects supported by BESTF. The project partners are Gothenburg Energy (coordinator), Chalmers University of Technology, Technical University of Berlin and Renewtec AB.

The goal is to develop, implement and demonstrate advanced syngas cleaning based on chemical looping reforming in both a pilot and an industrial scale bioSNG plant. In addition a novel measuring technique developed at TU Berlin will be tested and implemented in order to monitor and control the gasification process.

A distinct change from IGRC2011 to IGRC2014 is that the interest in renewable energy has increased significantly. The session on “Biogas as part of the Renewable Future” as the undersigned had the privilege to lead was placed in the largest room and attracted the greatest interest.

Power-to-gas was mentioned on many occasions and it is clear that there is a great deal of international interest, not at least from Denmark, in this opportunity to produce large amounts of methane, mainly from wind power, which then can be stored in the gas grid. 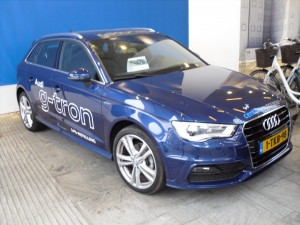 The Audi G-tron was displayed outside the entrance to IGRC2014. A few CNG cars from Volkswagen and a filling station from Gazprom Germania were also at display.

A great tribute to DGC who hosted this well-organized and successful event.

Renewtec AB has just finished the engagement by the Paul Scherrer Institutet in Switzerland regarding the contribution, together with other research institutes, to a book on Synthetic Natural Gas for Wiley and Sons, New York. Renewtec AB has been responsible for the chapter related to GoBiGas I.

Gothenburg Biomass Gasification, GoBiGas, is the world´s first industrial scale bioSNG facility. In the first stage a 32 MWth plant has been erected in Gothenburg. The gasification technology is based on indirect gasification licensed by Repotec and supplied by Metso Power. The technology allows the production of a nitrogen free syngas suitable for methanation without the need for an Air Separation Unit (ASU). Much of the gasification development has taken place at the Technical University of Vienna under the direction of Prof. Hermann Hofbauer and the gasifier type is often referred to as the Hofbauer gasifier.

The methantion is based on the TREMP-technology provided by Haldor Topsoe. Haldor Topsoe has also been the supplier of the syngas cleaning.

More information can be found on the GoBiGas website.