On the 13th of May Renewtec AB visited GoBiGas I, the world’s first industrial scale bioSNG plant, in Gothenburg.

GoBiGas I has a capacity of 32 MWth and is expected to produce 20 MW bioSNG. The gasification technology, based on indirect gasification has been licensed by Repotec and delivered by Metso. Jacobs Process BV is responsible for the gas cleaning and methanation with Haldor Topsoe as technology provider. 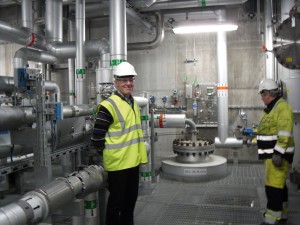 On the picture Ingemar Gunnarsson (to the left) and Lars Andersson (to the right) from Gothenburg Energy are seen in the heart of the GoBiGas plant. Jörgen Held, Renewtec AB was given a full afternoon briefing on the technology and both minor and major issues was discussed with the competent and engaged GoBiGas staff.

The raw syngas from the gasifier is cooled in the syngas cooler and then filtered. In the next step the tars are separated through an RME scrubber. Unsaturated hydrocarbons, being a precursor to carbon deposition in the downstream catalytic processes, are saturated through hydrogenation. Sulphur is removed together with approx. 50% of the carbon dioxide content in an amine scrubber. A ZnO bed reduces the sulphur content to 0.1 ppm to protect the sulphur sensitive nickel based metahantion catalysts. After the methanation which takes place in four steps the gas is dried by zeolites and the bioSNG is delivered at a pressure of 5 bar.

Renewtec AB has been engaged by the Paul Scherrer Institutet in Switzerland to contribute, together with other research institutes, to a book on Synthetic Natural Gas for Wiley and Sons, New York. Renewtec AB is responsible for the chapter related to GoBiGas I.

SPEIC14 is the scientific conference on combustion and related fields, jointly organized by the Portuguese and Spanish sections of the Combustion Institute.

Dr. Jörgen Held, Renewtec AB has been invited to be part of the Scientific Committee.